SAN JOSE, Calif., Aug. 24, 2020 /PRNewswire/ --eBay, one of the world's most diverse and vibrant marketplaces, today announced a partnership with street artist, illustrator and typographer Buff Monster, to release an exclusive pack of his "Melty Misfits" collectible cards at eBay.com/StayMelty. Three hundred and fifty editions of the card packs will be available while inventory lasts, each containing seven vintage-style trading cards. Further, eBay got a look inside Buff's studio for the second installment in its "Uncommon" digital series, sitting down with the artist to discuss the world of Garbage Pail Kids (GPK) and how it impacted his own creative expression.

"I've collected GPKs my whole life. They're subversive and nostalgic; they take me back to a much simpler time. And I've gone to great lengths to create vintage-style trading cards of my own; using custom-made paper, old printing presses, special inks and packaging them in old-school wax packs," said Buff Monster. "eBay has fostered a great community of GPK collectors, so it's great to bring my cards to that community and get a new audience hooked on cultivating collections of their own."

"Our collaboration with Buff provides a glimpse into the world of collecting, the dedication behind the hunt for that one special item, and how that passion can permeate other facets of life; in his case, in the form of a vibrant, rich world of ice cream characters," said Nicole Colombo, a General Manager at eBay. "These special Melty Misfits packs, available only on eBay, will speak to the community of collectors that the marketplace has long fostered, just as they pay homage to his own history with GPK which has been so instrumental in his art."

Buff Monster's Melty Misfits series transform the mass-produced and widely available trading cards of the 80's into a bespoke, small edition artist-made collectible. Each "Golden Melties" pack, developed specifically for eBay, will contain four various sticker cards along with the three new sticker cards featuring the artwork created for the three Golden Tickets found in Series 3 packs. Packs launch today at eBay.com/StayMelty and will be available until all 350 have sold.

In addition to the exclusive pack, Buff Monster will be listing special items from his personal archive for die-hard fans and new collectors. From super-rare collectibles to essentials like the Series 1, 2 and 3 base sets, this sale will include everything needed to start or expand your Melty Misfits collection.

Alongside the exclusive, Buff welcomed eBay into his space for a deep dive into his extensive collection of GPK. The video, part of eBay's "Uncommon" digital content series and titled "Buff and the Art of Collecting" showcases how his passion for collecting began back in his elementary school days, its evolution through the years, and how Buff searches for and sources ultra-coveted cards and artwork. Today, Buff credits the marketplace with helping him find 60% of his cards, including some of his rarest finds like "Bukimi Kun" cards, the Japanese version of GPK.

eBay's "Uncommon" series captures the unique stories of eBay's community, celebrating real people by sharing an up-close look at their passions and perspectives. Fans can explore eBay's original "Uncommon" series on eBay's YouTube channel, and learn more about the latest art releases by following @eBay on Twitter, Facebook and Instagram.

eBay by the Numbers

eBay Inc (NASDAQ: EBAY) is a global commerce leader including the Marketplace and Classifieds platforms. Collectively, we connect millions of buyers and sellers around the world, empowering people and creating opportunity for all. Founded in 1995 in San Jose, California, eBay is one of the world's largest and most vibrant marketplaces for discovering great value and unique selection. For more information about the company and its global portfolio of online brands, visit www.ebayinc.com.

Buff Monster is a New York City street artist who uses bright colors, bold lines and funny characters to make the world a better place. He names heavy metal music, ice cream, pop art, Japanese culture and graffiti as major influences. For over 20 years, he has painted murals around the world and is included in Banksy's Oscar-nominated documentary "Exit Through the Gift Shop." His meticulously-executed paintings have been shown in galleries around the world; the Bristol City Museum has a painting in their permanent collection. He's worked with some of the most recognizable brands, such as Disney, Hello Kitty, Samsung, Nike and Coca-Cola. In 2020, he did the lettering for Justin Bieber's latest album, "Changes." Under the Stay Melty brand, he releases a variety of limited-edition collectibles, including toys, prints, stickers and trading cards. 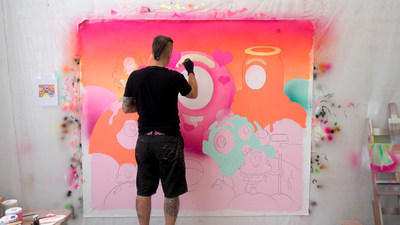