Y2K to Now: The Top Trends That Shaped the Past Two Decades According to eBay

SAN JOSE, Calif., Jan. 1, 2020 /PRNewswire/ -- With the end of the decade upon us, eBay took a retrospective look back at the top trends and events that shaped our online shopping carts every year since Y2K, according to search and sales data. From Pokémon and velour tracksuits to royal inspiration and fidget spinners, in between, each year's biggest moments had shoppers searching online for their 'must-haves' across millions of brands, products, gadgets and more. 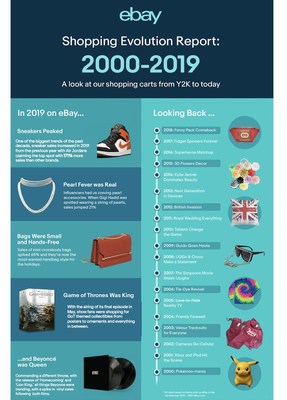 In 2019, consumer shopping cart activity showed us that…

Looking back to the start of the new millennium, below are some of the most popular trends that influenced our online shopping on eBay.com since 2000 to present.

Until 2020 trends are officially upon us, shoppers can head to eBay.com to shop a wide selection of items from every era.